It was just over two centuries ago that the global population was 1 billion in 1804. But better medicine and improved agriculture resulted in higher life expectancy for children, dramatically increasing the world population.

Watch how our global population exploded from 300 million to 7 billion in this brilliantly visualized video by Adam Cole and Maggie Starbard for NPR.

For more detailed information on the topic, read the related article on NPR.

Moreover, I highly recommend you to watch Hans Rosling’s eye-opening and entertaining talk on global population growth (infact, this is a must-see).

During this year’s See Conference there was an interesting discussion whether facts and figures are better transported via infographic or video. While there obviously is no clear answer to that – the “best” format being dependent on content, audience, situation etc. – it is worthwhile to compare the different effects of each format.

Here are two examples in which the same information is presented as infographic and in a video. Choose for yourself: 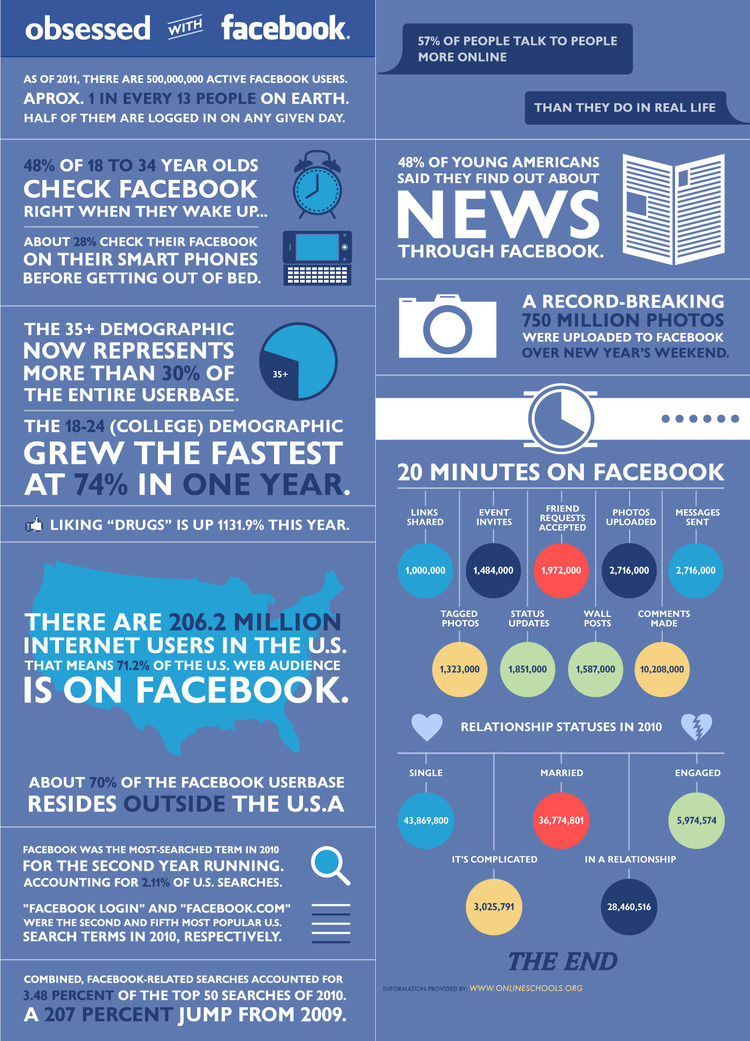 The Billion Dollar Gram / Debtris US
In the second example, both infographic and animation were created by data journalist and information designer David McCandless (Information is Beauftiful):

Which format do you prefer and why?

Generative Art, created by computer software and mathematical equations, and the traditional craft of printing (by hand) usually don’t come together very often. What happens, when you put a MacBook Pro and big buckets of color next to one another, is shown by artists Marius Watz and Jer Thorp for the Random Number Multiples series, an ongoing art publishing extension of Christina Vassallo’s curatorial platform Random Numbers.

Random Number Multiples provides an opportunity for artists to expand their repertoire through artwork editioning processes. It is a platform for artists to experiment with new techniques or engage with familiar ones in new ways.

As the current Data Artist-in-Residence at the New York Times, Jer Thorp took the newspaper as his reference point. With two separate works, or “timepiece graphs,” he tracked how often the Times printed the words ”red,” “green,” and “yellow” resp. “hope” and “crisis” from 1981 to 2010. Each piece is arranged so that the data can be read clockwise. 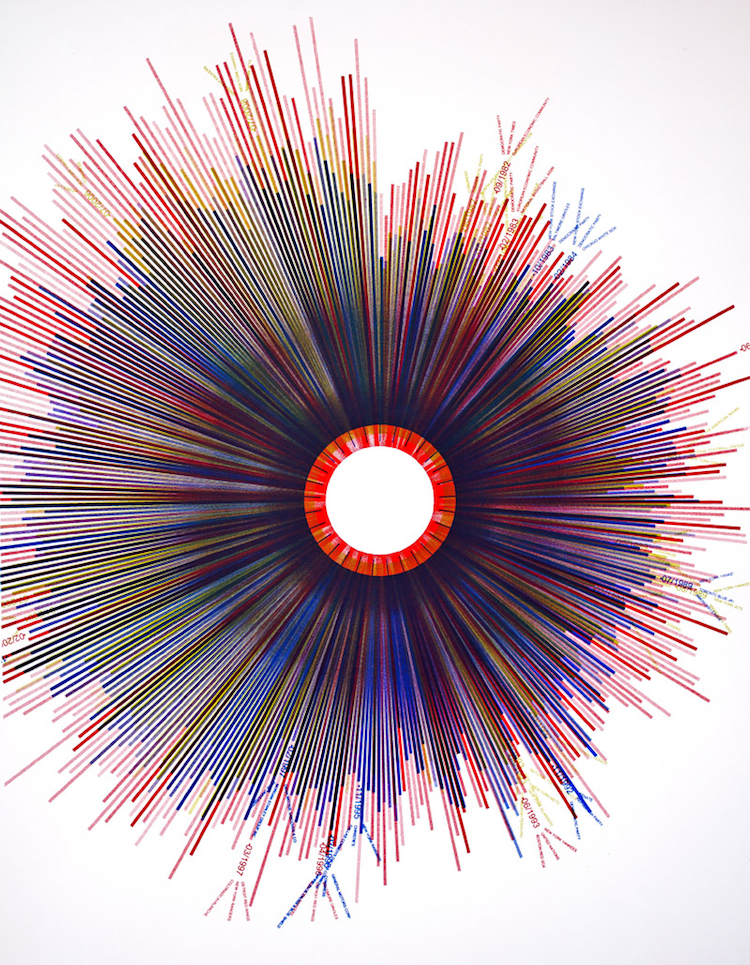 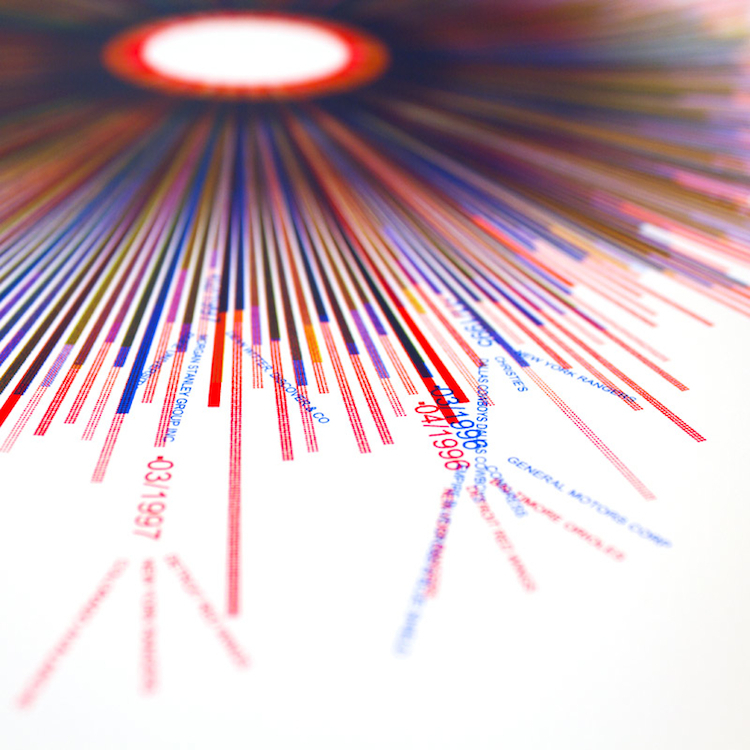 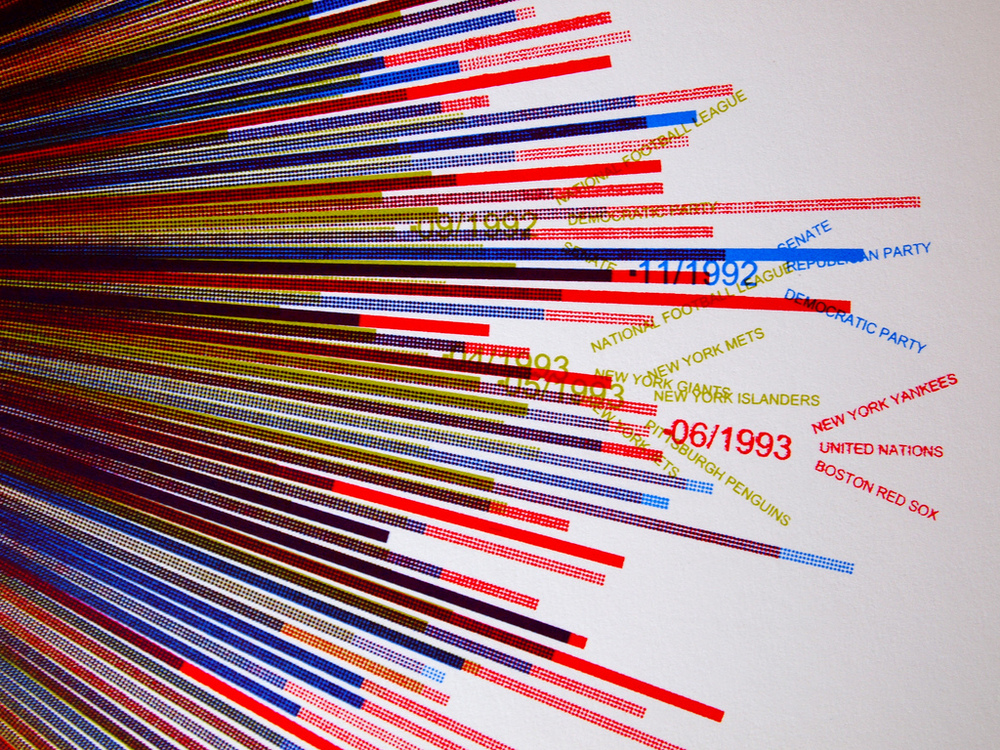 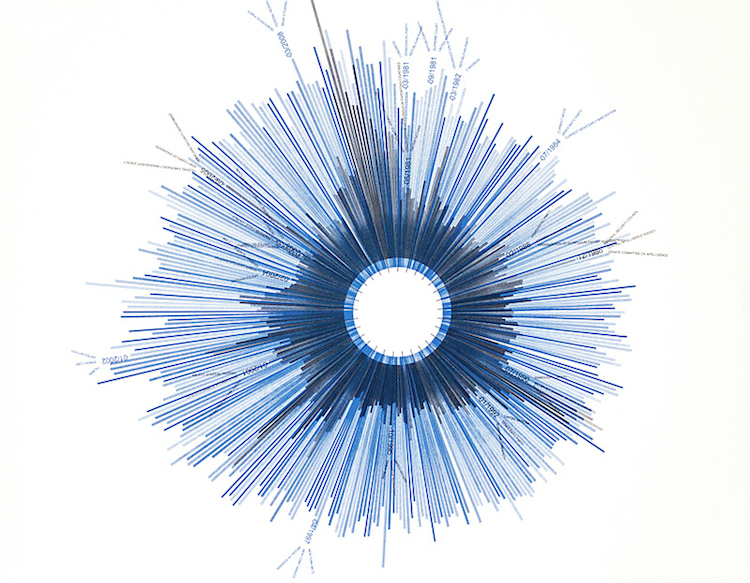 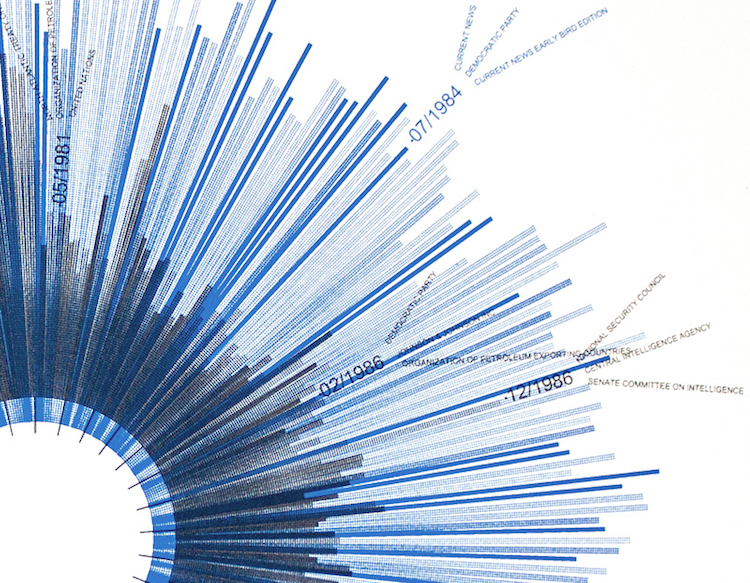 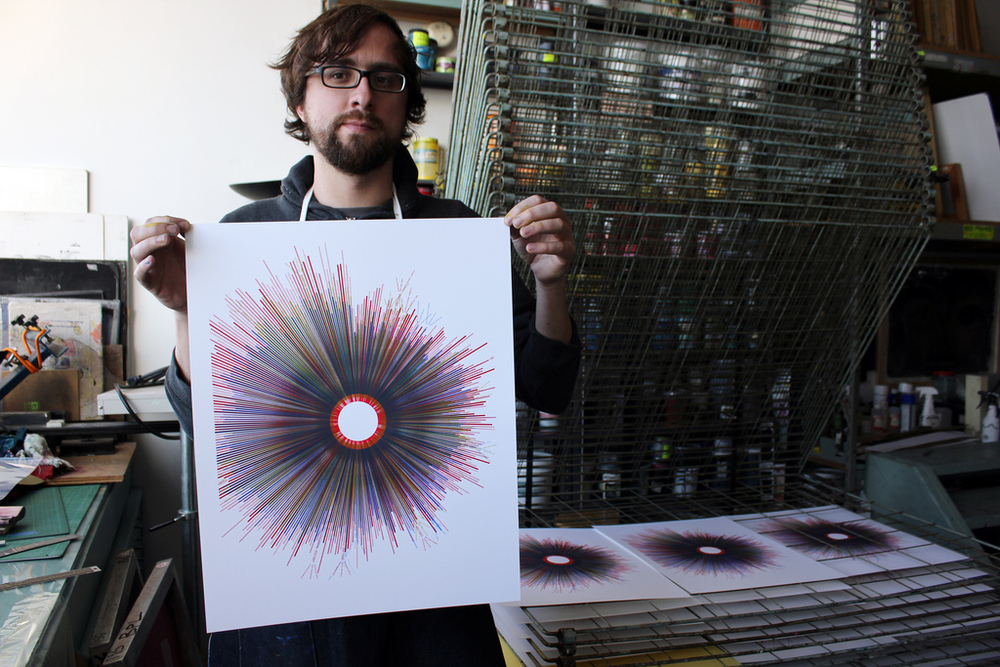 The “Arc” series that Marius Watz chose for the project are described as “pseudo-random compositions of radial shapes, subtly distorted by a 3D surface that lends the image a strong focal point and sense of movement.” 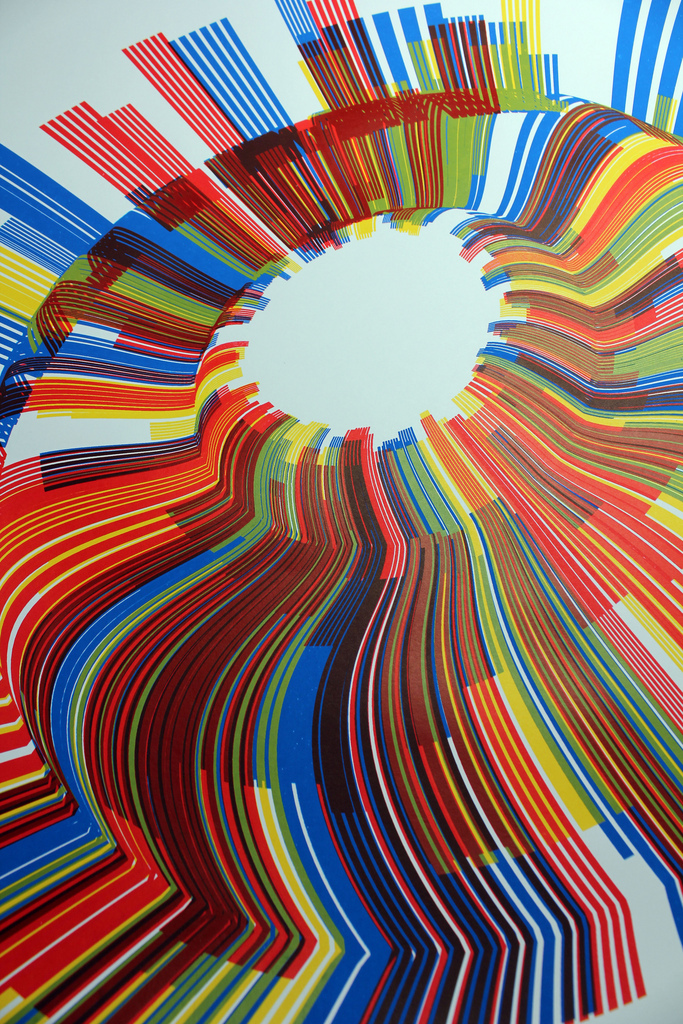 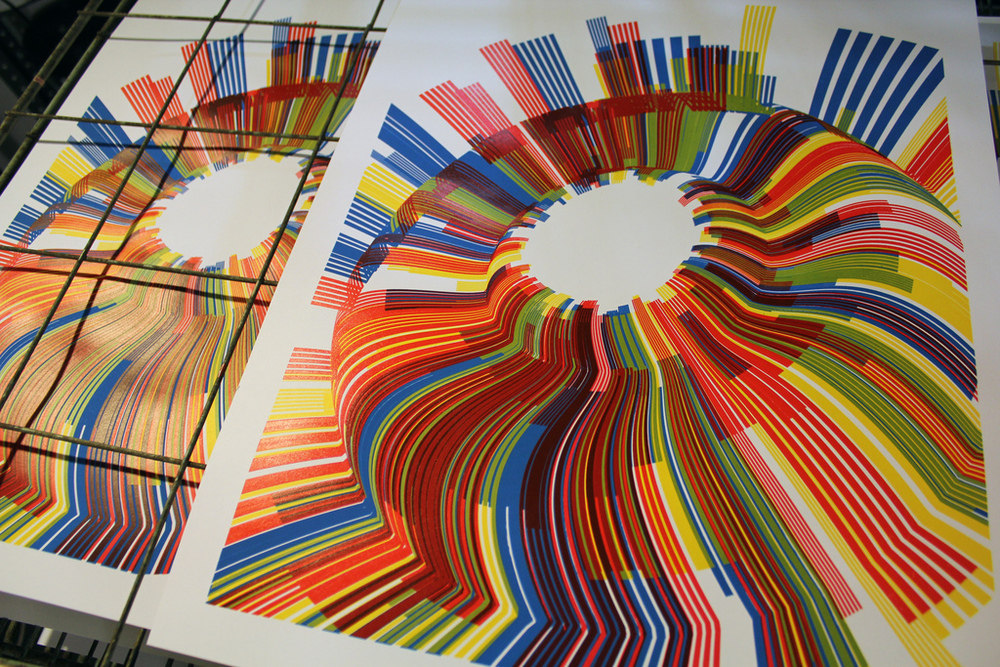 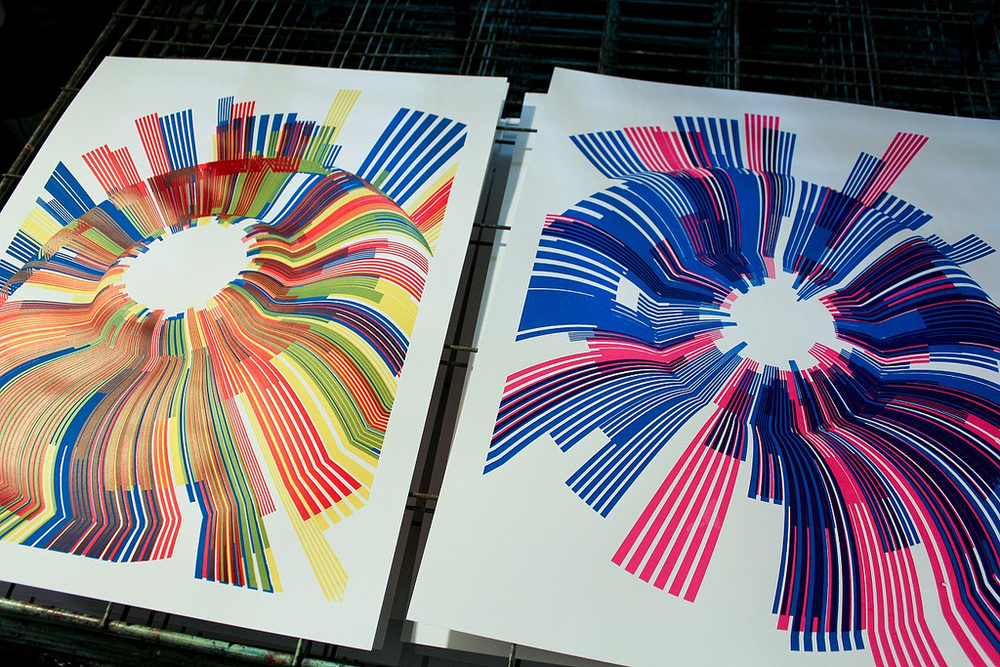 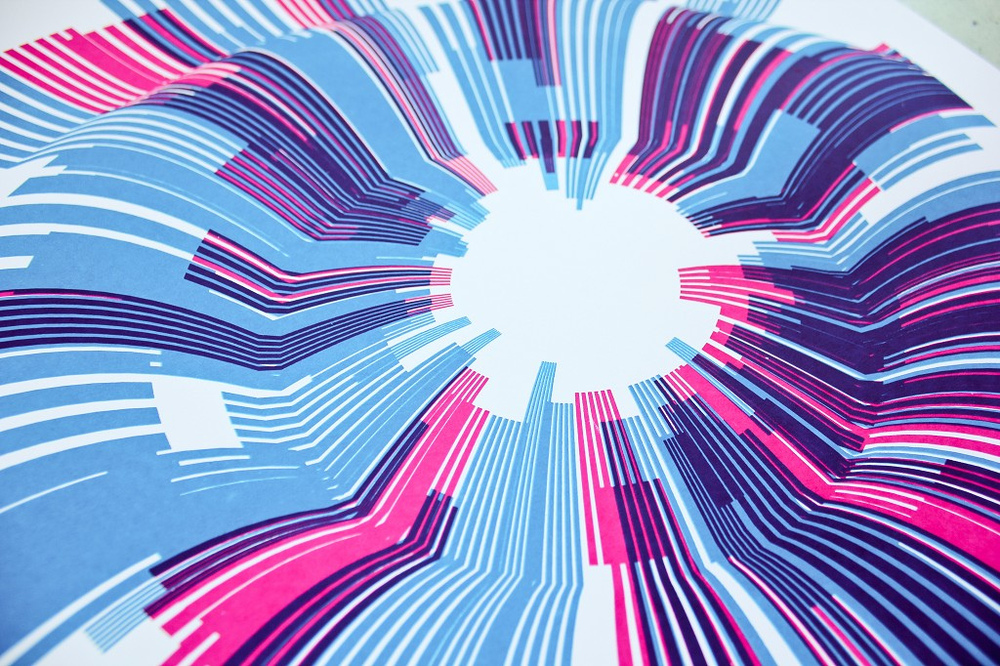 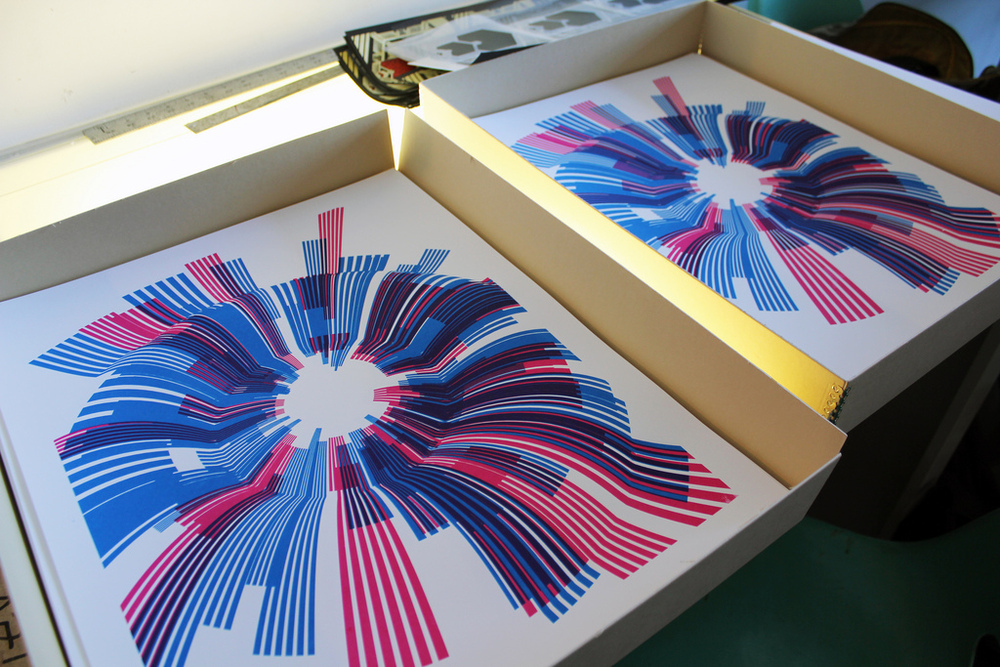 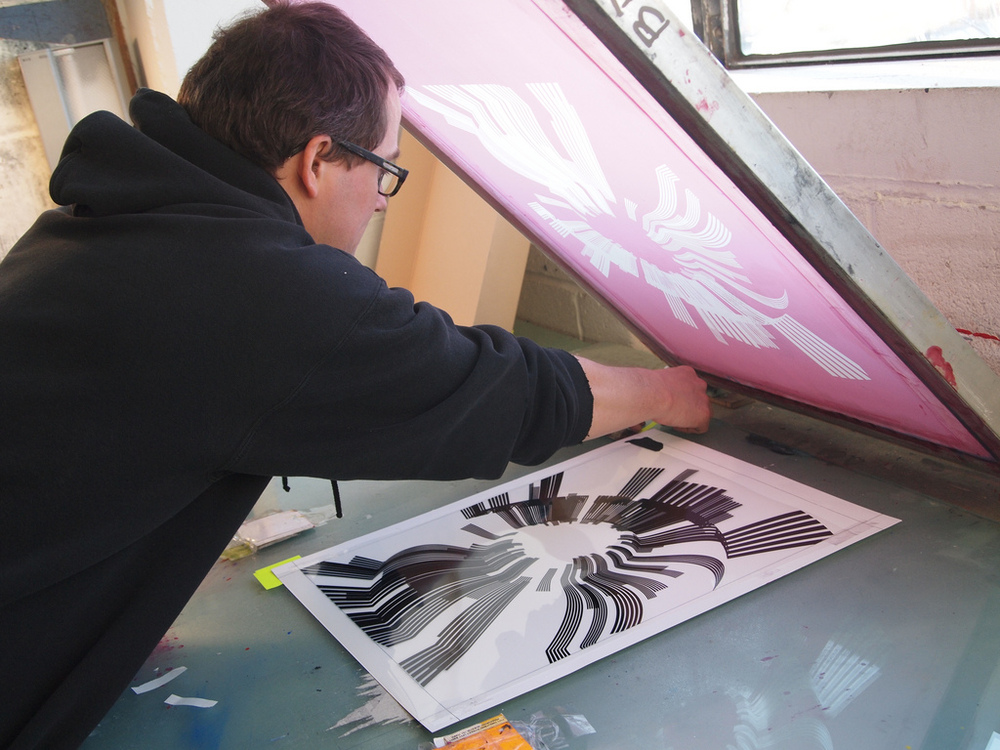 Prints are limited editions of 50, and will be available exclusively through Random Number for $100 each. 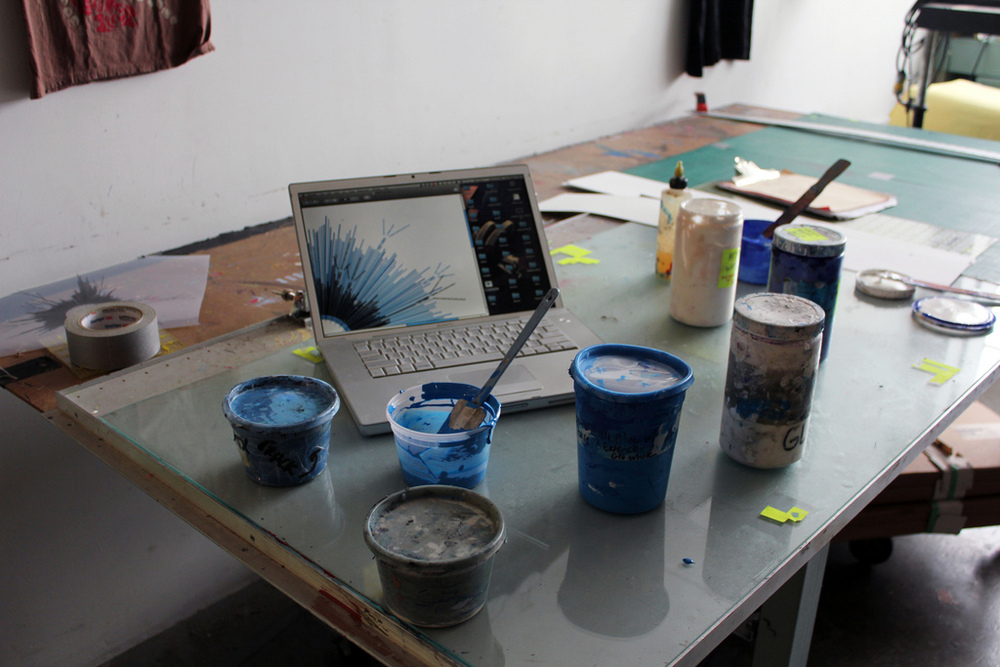 The data visualization “Conductor” by Alexander Chen turns the New York subway system into an interactive string instrument. Using the MTA’s actual subway schedule, the piece begins in realtime by spawning trains which departed in the last minute, then continues accelerating through a 24 hour loop. Each time a train crossed the line of another train, you hear a cello pizzicato sound pitched according to the length of the line. You can find the interactive version (where you can also pluck the strings at will) at www.mta.me or watch the video below.

Special Tip: Open www.mta.me in 2 or 3 tabs simultaneously to get a great sound experience.

If you are interested in the technical implementation of “Conductor”, read the project description at Chen’s Blog.

Paul Butler, currently intern on Facebook’s data infrastructure engineering team, analyzed the relationships of cities around the world through the eyes of Facebook.

Visualizing data is like photography. Instead of starting with a blank canvas, you manipulate the lens used to present the data from a certain angle.

Read the whole story behind the creation of the inforgraphic at the Facebook Engineering Blog.

Peacay collected this fantastic series of Victorian Infographics from the time between 1830 to 1890. 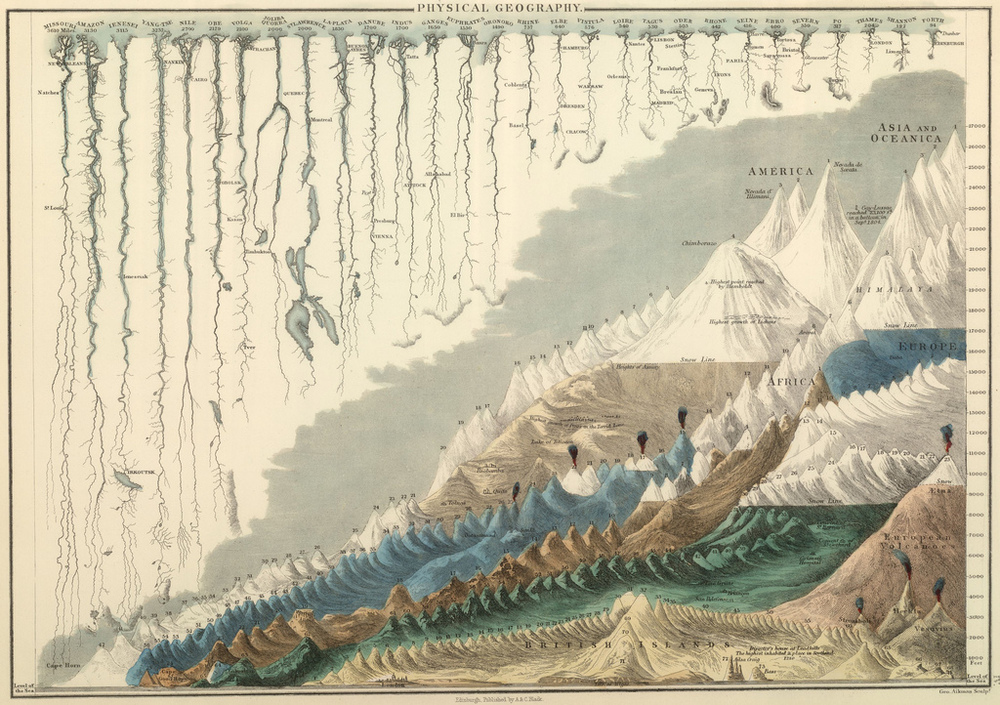 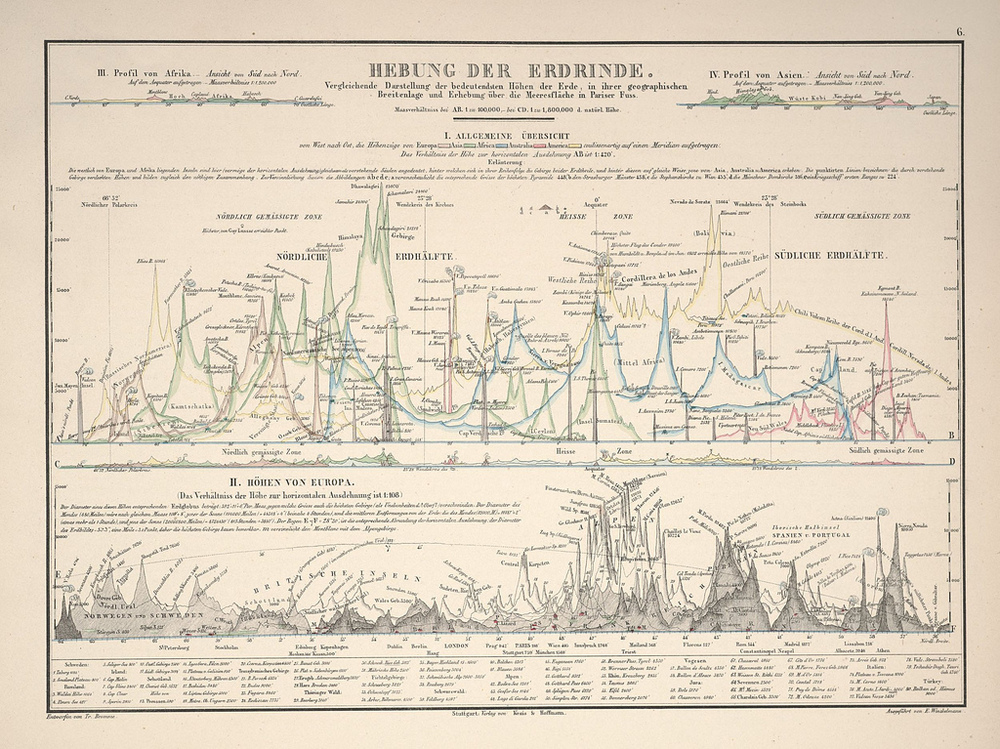 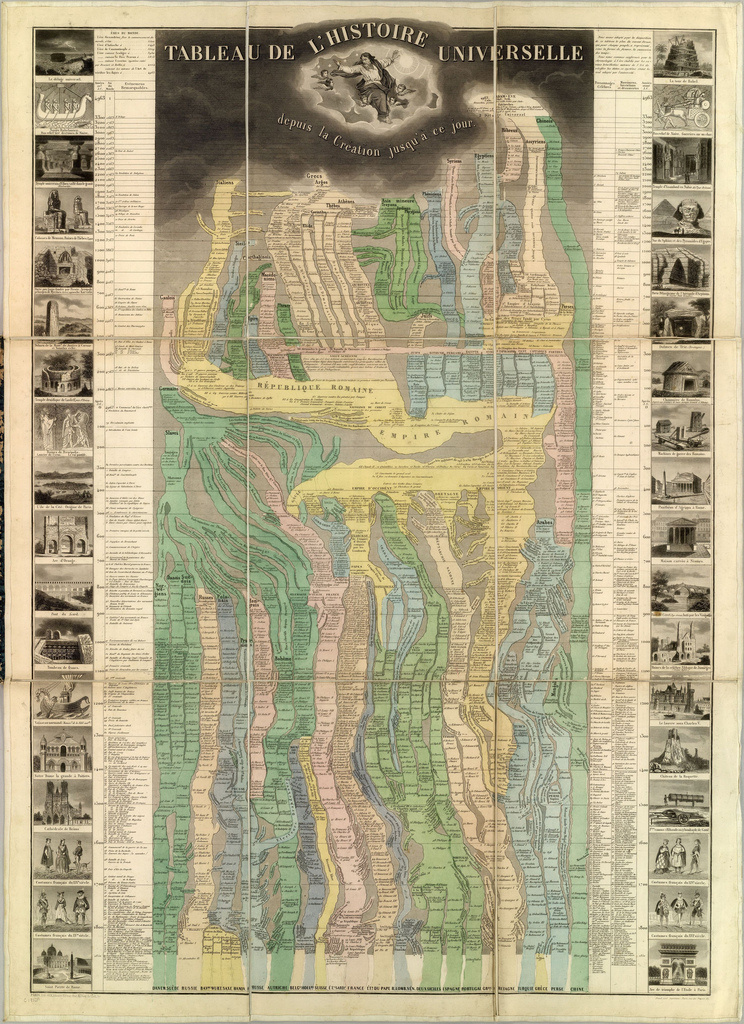 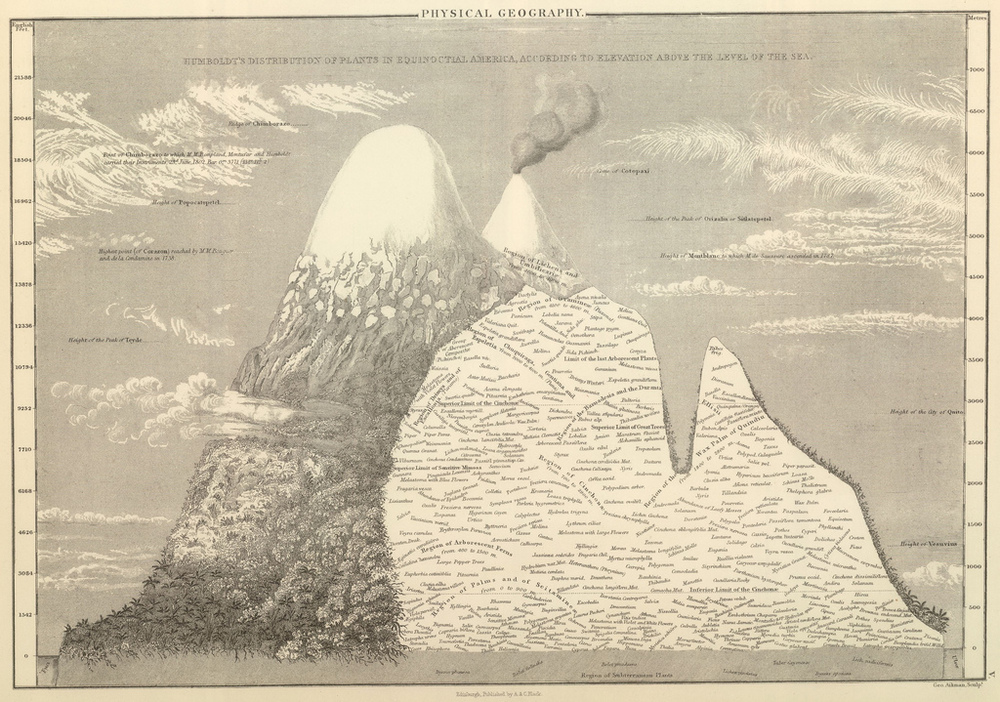 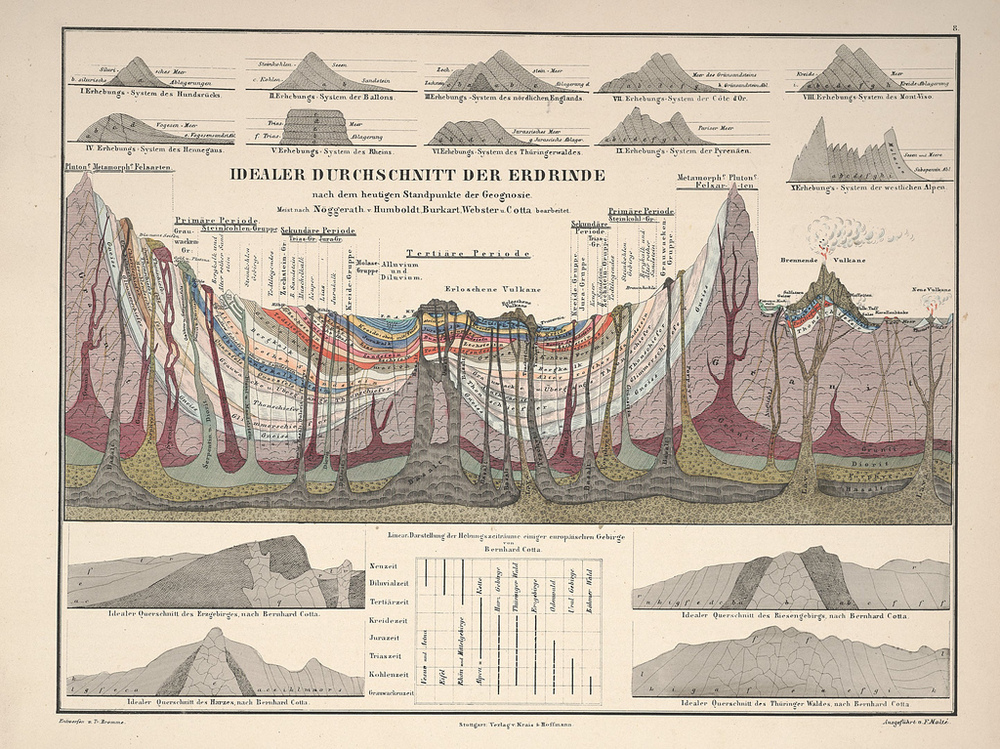 Visit BibliOdyssey to see the complete collection including the sources and links to the high resolution originals on flickr.

Speaking of Hans Rosling, the master of presenting macro economical data in an entertaining and truly mindset-changing way recently talked about the world population growth at TED in Cannes. In this talk, he does not only present his data digitally using his cool Gapminder software, but also mixes in some analog visualization technique as well. This new “analog teaching technology” he picked up from Ikea, he says.

In this TED talk by David McCandless, he shows and explains examples, that turn complex data sets (like worldwide military spending, media buzz, Facebook status updates) into beautiful, simple diagrams that tease out unseen patterns and connections. Good Data Visualization, he suggests, is the best ways to compress knowledge and it may just change the way we see the world. Quoting Hans Rosling, “Let my dataset change your mindset”.

For more examples of data visualization visit David’s website or buy his book “Information is Beautiful” at Amazon.com/Amazon.de.

Now, this is something I always wondered about: How come cheap airlines are so cheap?
This infographic explains all important reasons and how they contribute to the bottom-line savings. 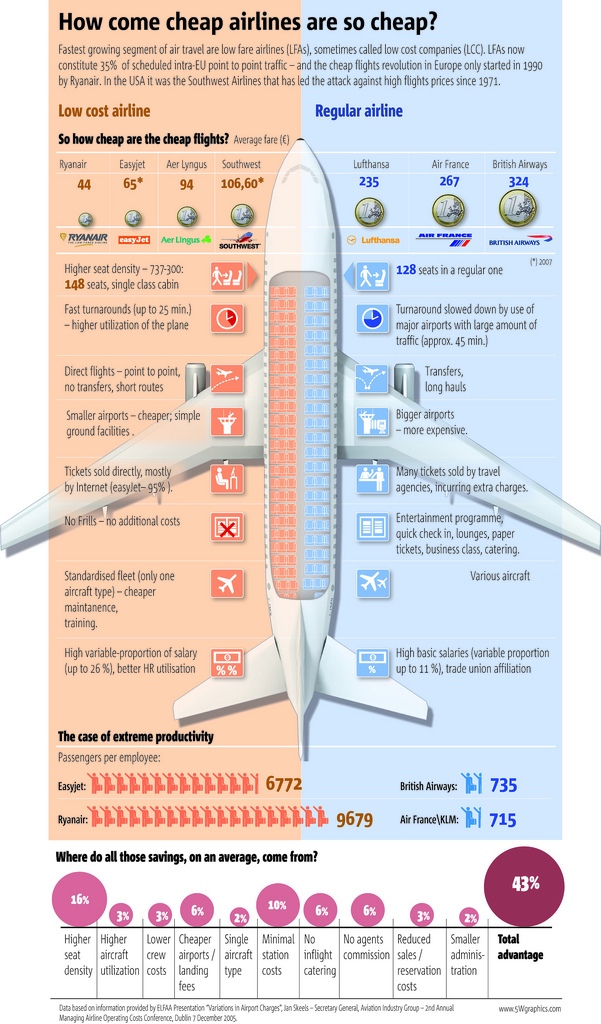